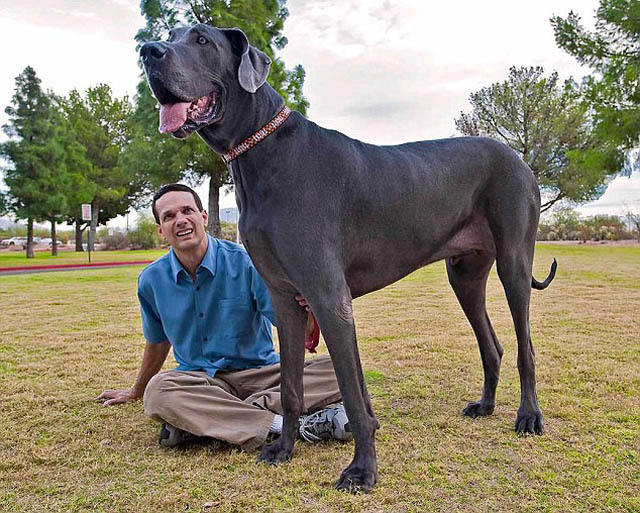 The first time I saw a great dane in person I was shocked. How does a dog this size end up being so friendly and cute? I thought it was going to pounce on me and my sister, but we soon learned that Great Danes are very well mannered animals, and Giant George was no exception to that rule.

Seen on TV shows like Oprah and the Today Show, Giant George was a warmhearted and friendly dog who made history as the world’s tallest dog until his death in 2013. After that, another Great Dane took the spot in the Guinness Book of World Records, but Giant George will always be remembered for his charisma and blue color.

Great Danes can come in many colors, of course, but Giant George was known as a “blue dane” due to his strange gray color that looks “blue” in the right light. What was funny about this dog, however, was that it was so massively large that people all thought the images circulating the web while he was alive were fake, but they were indeed real photos of the tallest dog in the world that many called the “gentle giant”.

Giant George died due to typical health problems that Great Danes face. The average lifespan of a dane is about 7 – 10 years and they usually develop heart disease or other cardiovascular or malnutrition problems earlier than other dogs, which can be difficult to control and surprising to the owner if they aren’t familiar with Great Danes.